Golden State Warriors have looked incredible out of gate in the 2022 playoffs. They beat the Denver twice already in the playoffs. Today is game 3 and I think Golden state have a big chance to win it. They game starts at 9:00pm today at the Ball Arena.

Golden State won and covered against the spread (-7.5) on Monday night at Chase Center. The final score was 126-106, and cleared the Vegas total of 221.5 points. The Warriors shot 54.8% from the field and 42.5% from beyond the arc. They collected ten steals, eight blocks, and turned the ball over just nine times in the winning effort. Steph Curry led all scorers with 34 points on 12 of 17 shooting from the field. The star guard has been coming off of the bench, due to injury. But that hasn’t hindered the Warriors, who have moved Jordan Poole into the rotation. Poole has been up for the challenge, dropping 59 points over the two playoff games so far.

In the regular season, Golden State Warriors were the 14th ranked team points. They are averaging 111 points, and they were the 8th best shooting teams making 46.9% of their shot and they nailed 36.4% of their three pointers. I think Golden State is going to be a problem moving forward in the playoffs for who ever they faced.

In the regular season Denver Nugget, they were the 8th highest score team averaging 113 points per game, and also they were the second best shooting teams making 48.3 of their shot but they aren’t that good at shooting threes.

Its been an ugly starts for the Denver Nuggets, so I don’t see them wining tonight but we never know what will happen. I think Denver nuggets will be eliminated from the playoffs because Jokic is the only the man that can do so much than other. Then on the golden state Jordan Poole and Stephen curry have step their game up. Also Draymond green has supplied a great defense and averaging 7.3 assist through two game. So, I don’t think Denver Nuggets  will win against Golden State Warriors. Who do you guys think will win comment down below!

Check this other cool blogs

This is the end of my blog see you guys next week maybe. 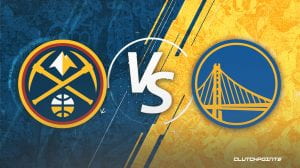