Hi guys, today for blog I will be talking about Kevin Durant

Kevin Durant was a high school basketball star and after playing college ball for only one season at the University of Texas, he was chosen second overall in the 2007 NBA draft by the Seattle Supersonics (a team in basket ball) . Durant went on to become a four-time scoring champion for the organization, which became the Oklahoma City Thunder.

Kevin Durant was born just outside of the nations of capital, in Suitland, Maryland, on September 29 1988. Kevin Durant starts to love sports with his sister Briana and two brothers, Anthony (Basketball player also) and Rayvone

What team he played in NBA?

First Kevin Durant played with the Oklahoma city and got more than 20 points for his first game in the team. Kevin Durant went to go switched team on 2017 and went to the Golden States Warriors. Kevin Durant played for the the Golden States Warriors and  the champion of the 2017. He still went to play there and got another champion but that time he was the MVP of the team. After that he went to the Brooklyn nets but he didn’t play because he has a serious injury. 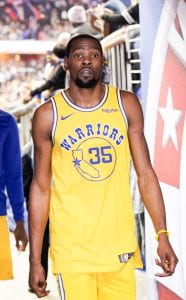 One thought on “Kevin Durant”